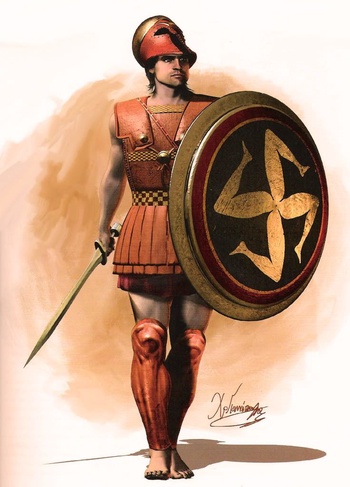 A tall striking young man standing at 6’1 A powerful physique and good reflexes. Dark brown hair and brown eyes. He was born in Nochet in the holy country in 1603. He was born in a time of war and invasion from outsiders like the Lunar Empire. His Grandmother Kira Talvalin and her husband were at the battle of Grizzly peak. Her husband Nestor perished, but she survived and later remarried. Her new Husband; Hasdrubal, and she would be present at the battle of Building Wall. But she had seen enough conflict and retired to take care of her household. Nazhuret’s father would see his share of conflict as a soldier of the Kimantorings. His final days as a soldier was manning the walls of Nochet during the Solanthi invasion of 1618. When Nazhuret came of age, he too stepped into the ranks of the Kimantorings as a heavy cavalryman and soldier. In three short years he would see more conflict and war than his father and grand parents. He was involved in the over throw of Queen Hendira, fighting in the Auroch hills and later the battle of Pennel Ford were he fought with great honour and courage. A captain at 21 he went with his king and the pirate king to sack the city of wonders, were he obtained as booty an ingot of iron. Unlike his family he found he liked the life of a soldier, he took on with a mercenary company, and during a great uprising against the hated lunars, he would see a Dragon take flight and destroy the enemy. He saw the Shaker priests appoint and new king and saw Argrath crowned and the Lunars defeated. He returned home to Nochet with much booty, but the call of battle and adventure, sees him leave for new ventures