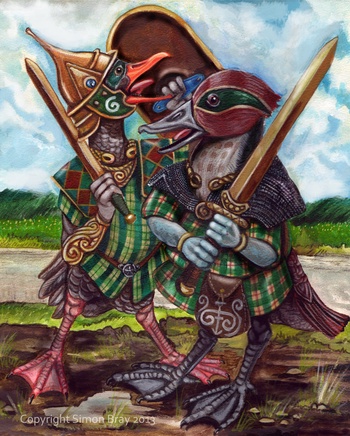 The durulz are a proud and ancient peoples. They have lived in Dragon Pass since long before the arrival of humans. They are devout worshippers of the Storm Tribe, and many durulz are Swords of Humakt, the god of death. Sadly, they are also ducks. Not even anthropomorphic ducks, but more like Carl Banks-style cartoon ducks. It’s not known if the durulz were humans who were cursed to be birds or the other way around. The durulz certainly don’t remember. They have a long and painful history of being mistreated by the Orlanthi, who either do not take them seriously or do not recognise them as fellow worshippers of the Storm Tribe. They live by the Creak-Stream River, which is often dangerous due to its proximity to the undead-haunted Upland Marsh. Prince Sartar did take the ducks seriously and forged a strong alliance with them. He even erected the city of Duck Point to open up trade and communication channels with ducks and other beastmen. As part of an ongoing campaign to weaken resistance in Dragon Pass, the Lunar general Fazzur Wideread instituted the Duck Hunt: any clan that offers up a duck corpse gets a year free of taxes. This has angered the ducks, but they are still loyal to the House of Sartar. It’s an easy mistake to underestimate the ducks, but don’t be fooled. Generations of living near the Upland Marsh have turned many of the durulz into deadly warriors, and the cult of Humakt is a major one in duck culture.