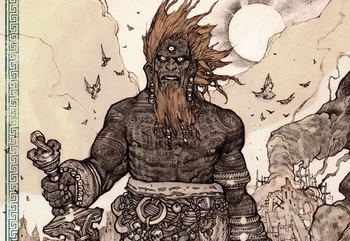 An extremely surly and untrustworthy race. At its full growth of 15 meters in height, the giant is a truly formidable creature. Fortunately, most giants are not that large. Giants grow at the rate of 1 point of SIZ per game year. For STR and SIZ, roll 3D6 for every 2 meters of height and add +18 to each. It is unknown what the upper limit of a giant’s lifespan is, as especially old and huge ones are so dangerous that armies are marshalled against them. Gonn Orta, a famous and ancient giant, was born in the First Age and is said to be active still. Giants normally shun contact with humans, but they have a fondness for human flesh. The smell of carnage and carrion lures them from their mountain lairs in search of easy feasting. People often call them “the Devourers.”

Human-sized opponents should subtract –10 from all hit location rolls when attacking giants, unless the giant stoops to reach them. Giants are so naturally contrary that any magical attempt to influence their actions or emotional responses (such as the spells of Befuddle, Demoralize, and Fanatacism) have only a 5% chance of working on them, no matter how many magic points the spell user has used, or how high their POW. Giants have thick skin worth 6 points +1 point per D6 of their damage modifier. Thus, a giant with a 7D6 damage modifier has 13-point skin.