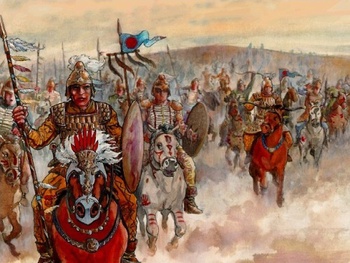 The Pure Horse People of the Grazeland (also called the Grazeland Pony Breeders, Grazelanders or Grazers) are an ancient people, some of the last remnants of a mighty empire that ruled Peloria in the First Age. They are the chosen people of Yu-Kargzant the Sun Horse, who granted them the honour of herding and riding the horses that are his descendants. They once ruled all of Dragon Pass, but are now confined to the hilly land that lies between the Holy Country and the Lunar Empire. The Pure Horse People were the first humans to settle in Dragon Pass following the Dragonkill War. They were driven from Prax by the other Beast Nomads and forced to take refuge in the land they knew as the Doomed Place. But instead of the monster-haunted nightmare they were expecting, they found pristine wilderness empty of humanity. They worked great magic through the country, and Dragon Pass became theirs.