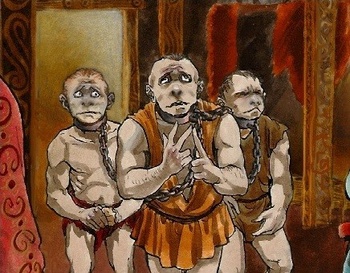 Styganthropus uzko var. enlo The product of the Curse of Kin, these are puny degenerate creatures, mockeries of the mighty troll frame. Many trollkin are born dead or die shortly afterwards (especially those born to other trollkin). The wretches that survive never finish their natal development and are stunted and unfinished for their whole lives. Post-birth growth is often erratic and bizarre; resulting in a wide variety of misshapen mutants, twisted bodies, and often deformed bones or faces. They have overdeveloped eyes that make them very sensitive to light. If they could stand erect, they would be no more than 150 centimeters tall, weighing maybe 60 kilograms. In their usual cowering squat, they rarely exceed 1 meter in height.
Superior Trollkin are smarter and more magically capable than their unfortunate kin.