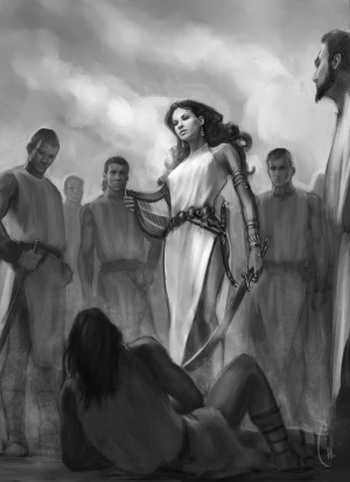 Nobles live by the work of others. In return, nobles coordinate, speak for, and protect their community. Rulers and leaders often come to their position through merit, but many noble offices tend to be hereditary. Nobles can be surprisingly accessible, welcoming chances to display their courage, prowess, generosity, and wisdom. In Glorantha, many nobles are also priests. Among the Orlanthi, chiefs and kings are also priests, and the martial aristocracy called thanes evolved out of the priesthood in the Second Age. During this time, it was discovered that an armed militia of farmers and herders could be overcome by a smaller band of elite troops. Chieftains chose their com- panions to fulfill this martial role among the community instead of the priests. It should be noted that thanes are always thanes to someone else; such allegiances fit nicely into the Orlanthi concept of loyalty to their chosen leaders. Where nobility is also a priestly office, adventurers still use the skills and equipment list given below.