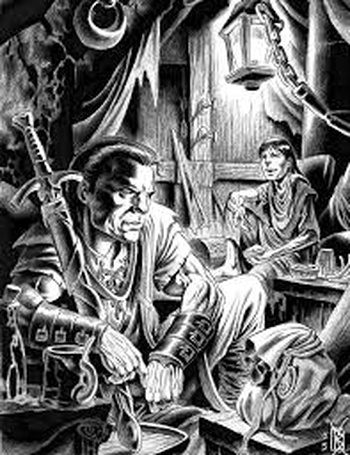 5’8” 160lbs Athletic frame and youthful appearance. hair brown, blue eyes. easy going demeanor, hides a very calculating individual. He was born in Old Tarsh, but during the upheavals of war, his family was forced to move and settle in Pavis. His family saw little of the conflicts that took place after, but when he was of age, he was conscripted and saw some war as the Lunars were pushed out of Esrolia and later Sartar, he also found himself fending off attacks from the Prax nomad tribes when Pavis rebelled against the Lunar empire. He left the army and to survive the lean times he stole what he needed to keep himself and his family alive, though it damaged his relations with what remained of his clan. He has taken to thieving to maintain a decent standard of living, but he is also eyeing up the ruins of Big Rubble. He has heard tales of Griselda and her band and hopes to set up his own crew.